Episode 73: A Great Time to Be a Podcaster 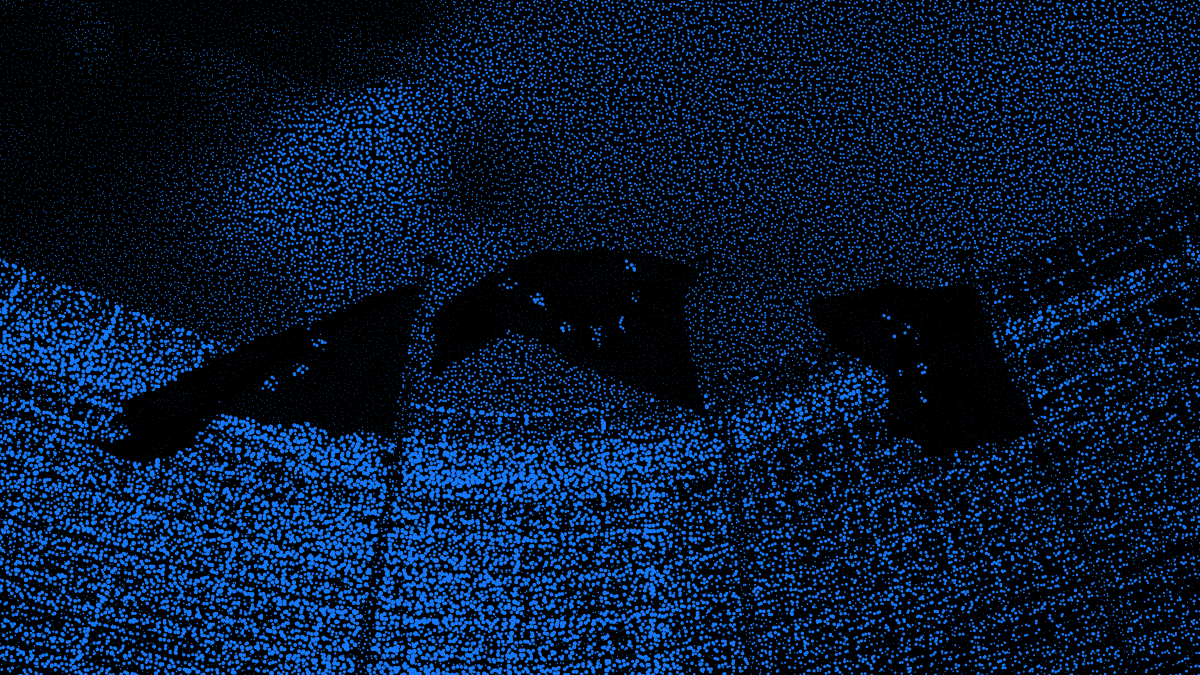 The EU copyright reform is now in effect in all member countries and with it comes the horrible idea of upload filters. Let’s discuss why this is bad for journalism, already very much on its last legs, and free speech in general.

The EU copyright reform, which just came into effect in Germany, is a disaster for free speech and journalism. In this episode of The Private Citizen, I will explain why this is.

On a side note, also check out my new podcast Escape the Talk Show, where my mate Jonathan and me ramble on about life while playing a Russian hardcore shooter. If you actually want to see us play, you should go to scenictarkov.com.

A quick update on the situation with automatic license plate scanners discussed in episode 58 of the show. The situation with regards to ANPR in Germany has now changed, with the governing great coalition deciding that automatic license plate scanners will be allowed in the future all over Germany if the police of public prosecutor’s office deems this necessary

This kind of thing was de facto already possible, but since the Constitutional Court had decided it was illegal in some previous cases, police was very unsure when they could use it – if at all. Now the government has, once again, unilaterally decided that it should be allowed. The wording of the law makes it sound like it will now be trivial for police to use in cases like manslaughter, murder, large drug smuggling operations and terrorism cases.

Today, Germany (at the last possible moment), implemented the EU copyright reform – officially titled the Directive on Copyright in the Digital Single Market. Especially article 17 is a problem, as it forces platform providers to adopt so-called upload filters.

In effect, large rightsholders within the music, movie and publishing industries were of the opinion that Google (via YouTube) makes too much money on illegally uploaded copyrighted material. They lobbied the EU government to create legislation to force platform providers to check every single piece of content that is uploaded before it is published.

A Small Discourse on Copyright

In 1952, copyright law in most western countries was unified in the Universal Copyright Convention, often also called the “Geneva Convention”. Crucially, this eventually unified virtually every country in the world to abide by one important legal standard established in the 1886 Berne Convention: That the mere creation of a work is enough for it to be covered by copyright.

Before 1989, to be copyrighted in the US, a work had to be registered with the Copyright Office and include a copyright notice. I think this is where the misunderstanding stems from that there are works that aren’t copyrighted.

These days, in jurisdictions almost all over the world, any work, as soon as it is created, is copyrighted. In some countries, like in Gemany, the original creator cannot relinquish these rights (parts of contracts that stipulate this are per definition null and void). The closest thing he or she can do is to grant someone an exclusive license. The creator always retains basic rights to their work, though. The “right” part in “copyright” originally comes from this aspect.

As someone who makes literally all of his money by creating works, and being guaranteed payment for them because of copyright, I am not against copyright. But copyright as it was before this reform, was fine. This can be clearly seen by examining the profits of the music industry, the movie industry and also big publishing companies. All of these corporate entities make millions or billions of euros in profit each year. There is absolutely no reason for this reform save for pure, unadulterated greed.

What this reform does is protect the interests of big business. And that is especially bad when it comes to journalism. As I’ve documented amply on this show, traditional journalism as created within large business entities, is failing. And it is failing so badly that it is causing large societal shifts, like the rift between conservative and progressive voters over Trump and horrendous misunderstandings of reality like the one that caused widespread destruction of civil liberties in the wake of the SARS-CoV-2 pandemic.

Upload filters simply will not work correctly. Anybody that has studied the technical aspects of technology like Google’s ContentID easily understands this. As anyone with a YouTube channel knows, ContentID was already very problematic before it had to scan for all possible copyright violations. I myself have ample experience with this kind of thing. The last obviously bogus copyright claim against my channel was in March. 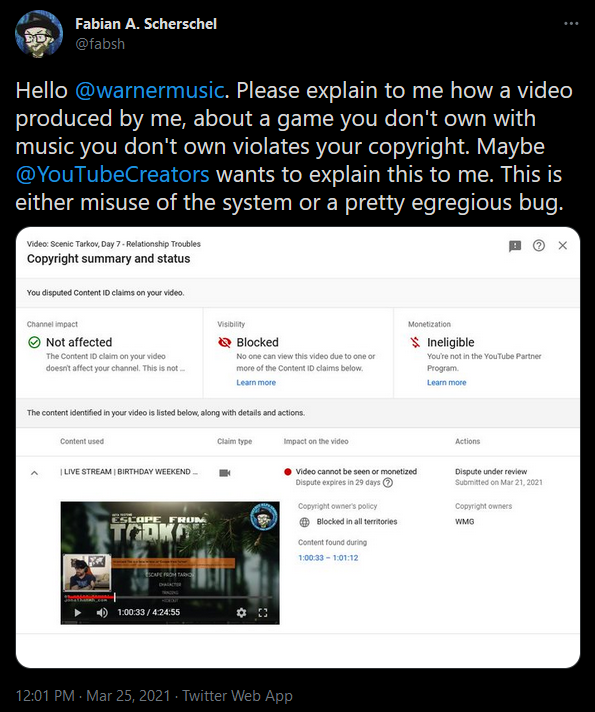 I remember when, fighting against the copyright reform locally here in Gemany

, I challenged my own union and trade association, the Deutscher Journalisten-Verband (DJV), to explain why they are for this reform. They always claim to fight for freelancers but then support shit like this, which only helps the big publishers. In discussing this topic with the head of the DJV Hamburg, it became clear that none of the people working there had any clue whatsoever of how upload filters would work on a technical level. They basically thought “it’s easily done with AI”.

Artillery for the Culture Wars #

This new copyright reform, and especially upload filters, will be used by the big players to hinder small, independent artists and journalists. Technically, quoting a work of 15 seconds or less is still allowed, so one can use video and audio of an important event to report on it, but this was always allowed and experiences of the past have shown that systems like ContentID either don’t work or were misused to block this. Big publishing companies are already under fire for their shitty journalism, especially in the wake of Trump’s term in office and the pandemic, with small independent writers and videographers often being the only source for well-researched news and commentary. They will use this, and the power only they have at their disposal now, to fight back against the small guys who are handing them their lunch.

Upload filters will make it a lot easier to block independent voices and reporting. In some cases, the new law even automatically blocks reporting outright. For example, platforms now have to unilaterally block all uploads of footage from sporting events or movie premieres that are ongoing. Which means you can’t even post a meme of a goal that happened in the game you are watching – it will be automatically blocked. In Germany, there are specific exceptions from copyright for journalists reporting on the news or commentating on them. It will be nearly impossible to accommodate these edge cases in a technical system. And since the news are by definition a thing of a moment, a manual review process that takes a day or two also makes the whole exercise pointless.

One generally good thing about this reform is that remixes, memes, caricatures, pastiches, parodies and fan fiction are now explicitly allowed without restrictions. It is highly doubtful that those won’t end up in upload filters and blocked from being uploaded, though.

Some “trustworthy copyright holders” (whatever that means) will even get a so-called Big Red Button that allows them to delete any content they want off platforms, without need for review.

A Law to Make You Want to Brexit #

In the UK, one positive aspect of Brexit is that the government will not be implementing the EU copyright reform. It is currently unclear how the technical upload filter mechanisms at YouTube and other large websites will effect users from the US and UK. In any case, under the new law, platform providers have until 1 August to implement technical measures anyway.

There was a good discussion about email privacy in our Discord channel for the show. Especially funkyduck provided some interesting insights. I will keep this discussion in mind and plan a future episode on this topic, as there seems to be ample interest among producers.

The show’s theme song is Acoustic Routes by Raúl Cabezalí. It is licensed via Jamendo Music. Other music and some sound effects are licensed via Epidemic Sound. This episode’s ending song is Love and War by Chester Malone feat. Lollo Gardtman.