Episode 52: A President for All Americans

Donald Trump has left the White House and Joe Biden is now President. What does that mean for the future of the US and beyond? I look back at what happened with Trump and forward at the future with my guest Michael Mullan-Jensen.

Welcome to The Private Citizen for this week! Please excuse the fact that this episode is a day late. Today, I am talking to my friend Mike once again about US politics. Even though Mike was born in Denmark and now lives in Ireland, he follows US-based politics closely as he thinks, like me, that it is very important to people outside the US and sets the tone for what is happening in much of the world.

My talk with Mike was recorded live (Part 1 & Part 2 of the recording on YouTube) on Inauguration Day – Wednesday night in Europe. This is also why the episode is late: We talked long into the night and I just got to finishing the recording and editing this morning.

Last week, a widely quoted story from The Washington Post claimed that banning Trump from Twitter had “dramatically” reduced misinformation on the net. This is based on data from Zignal Labs, a company that pulls news data from media sources and analyses it. Which, as far as I can tell, is all based on social networks and traditional media which – according to Fab’s thesis set forth in the previous episode – mostly gets its stories from those very social networks.

So with other words: If you ban the guy who gives you all your material from giving anybody any material, nobody reports on the material? What an incredible discovery.

Meanwhile, this analysis says nothing about what actual people are actually talking about in their daily lives – misinformation or not. Because that’s happening in closed Facebook groups, DMs and encrypted messengers. So if anything, this study proves that the media was the biggest source of what it calls “misinformation”.

I wrote some more on this in my newsletter.

Mike argues that the storming of the Capitol was a calculated move by Trump and his allies to try and force at least some kind of delay to the certification of the election result. If that is true, where does it leave us?

The Insurrection Act of 1807 clearly does not apply since it empowers the President to deal with insurrectionists opposed to his government. Which obviously wasn’t the case here.

Impeaching Trump (again) or using the 25th Amendment (if that is even possible in this case is highly debatable) is obviously useless based on the time the proceedings would take and seeing as he’s left office. It would only serve to bar him from holding a public office again – which has less to do with justice and due process than with strategic goals of the Democrat party.

The theory that there was a conspiracy by Trump and his associates to incite the insurrection is just that right now: a theory. Which by definition makes it a conspiracy theory. To take any significant legal action on this, it would have to be proven in a court of law. Which seems very hard to do.

I think it is beyond doubt that Trump and his camp was behind the rally that spawned the riots. But to go from that to saying that he is therefore responsible for the riots as well would require extraordinary proof.

Charges that can, and are, being levied against the rioters include 18 U.S. Code § 2384 (seditious conspiracy):

Whoever incites, sets on foot, assists, or engages in any rebellion or insurrection against the authority of the United States or the laws thereof, or gives aid or comfort thereto, shall be fined under this title or imprisoned not more than ten years, or both; and shall be incapable of holding any office under the United States.

The FBI is looking into foreign payments allegedly tied to the storming of the Capitol.

As part of the investigation, the bureau is examining payments of $500,000 in bitcoin, apparently by a French national, to key figures and groups in the alt-right before the riot, the sources said. Those payments were documented and posted on the web this week by a company that analyzes cryptocurrency transfers. Payments of bitcoin, a cryptocurrency, can be traced because they are documented on a public ledger.

The only thing the mentioned analysis proves, however, is that someone donated $250,000 to people connected with a political cause. The analysis does purposefully not reveal who the donor is nor can it provide any clues to this money having being directly connected to the situation in question. It happened a month before the riots at the Capitol. The analysis labels the donor as an “extremist” without providing justification for this label. In fact, the cited “strong evidence” is laughable. It is basically a relatively astute, if biased, analysis of current events. If the cited text qualifies for extremism, a good percentage of all political science professors at German universities are extremists. Interestingly, the “extremist” in question is a computer hacker who seems to have been very ill, depressed and says he killed himself after donating the money.

Fiona Hill on why the insurrection at the Capitol was actually a coup attempt.

But Donald Trump has left office, so let’s focus on the upcoming presidency of Joe Biden. How will he improve matters? And what are journalists going to do now that their favourite subject of ridicule and disgust is no longer at centre stage?

Biden inherits the government of arguably the most powerful country on the planet in a time when everyone is effected by the worst societal crisis short of actual warfare imaginable. Even completely ignoring if this is actually down to the underlying disease or not, it is clear that people, in the US and elsewhere, are badly suffering from the consequences. 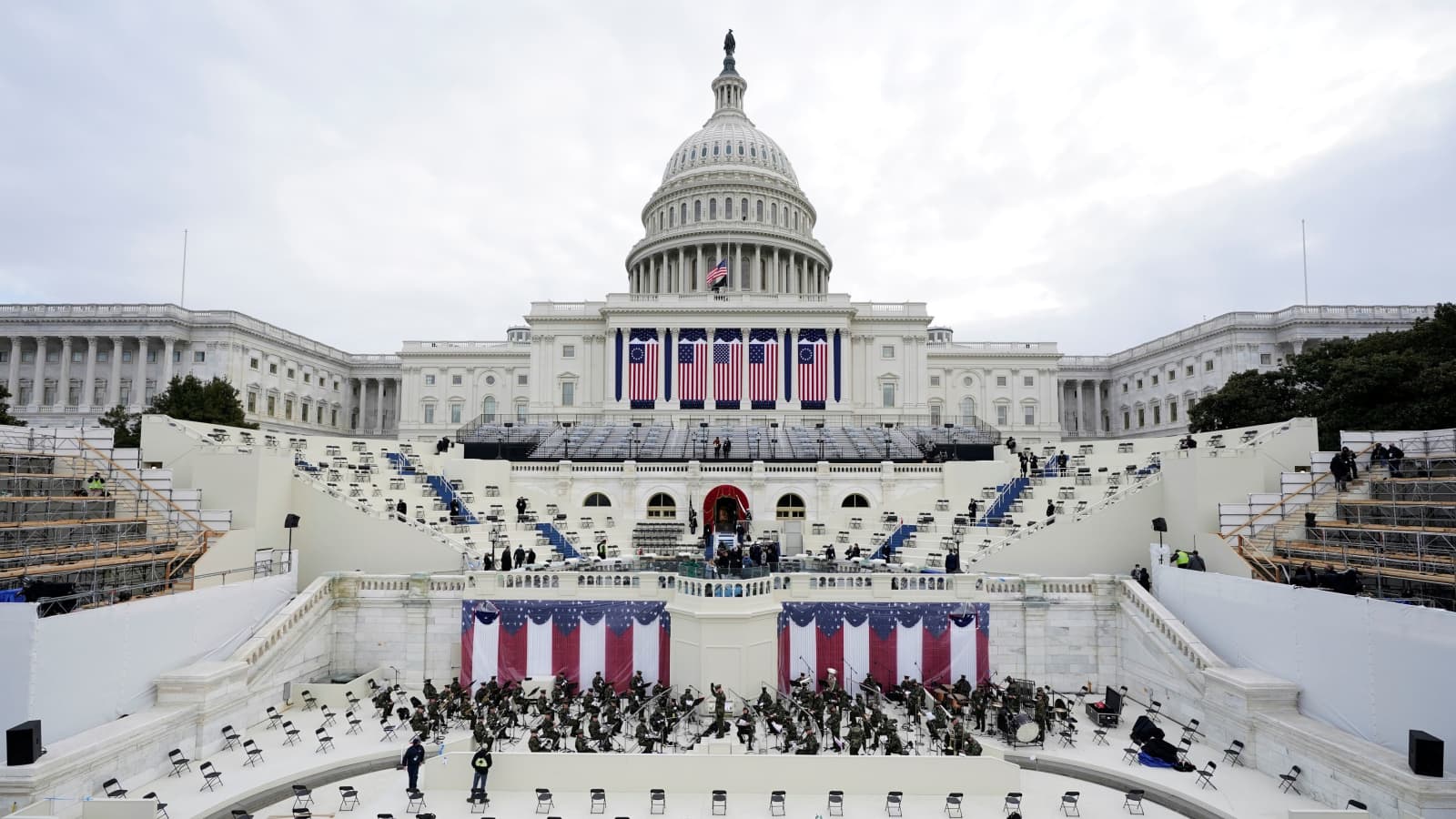 Meanwhile, society is divided like never before. Politics is dominated by partisan attacks and public discourse is full of propaganda from all sides. Obvious spin, such as a few years ago was only seen in company press releases, is now being published as journalism by major media outlets. Which leads, understandably, to distrust of the press which then leads to people publishing absurd views as “alternative news”.

This divide between those who believe what the press reports is fact and that “science tells us” and those who are being marginalised by this reporting and thus pushed to the fringes of society and into the hands of dangerous extremists, is widening. Critical thinkers, whose accounts do not neatly fit within the established margins of acceptability are silenced. Meanwhile, social media lynch mobs are being weaponised to silence political opponents and tech companies are actively jockeying for positions to facilitate this to appear favourably in the public view.

How is Biden going to unify the nation under these circumstances? Fab thinks it’s impossible for things to get better, because Biden is allied with many of the forces who see these changes as positive. He is simply going to cater to the other half of the political divide, opening up an opportunity for the Republicans to counter in four years. And so it will go back and forth.

One example of what the future holds is cries for censorship of podcasts. How many established media outlets are absolutely useless is exemplified by this call for revenge against Trump administration officials on Forbes. It’s a hilarious statement of inaptitude of the writer in question, which includes this gem:

Let it be known to the business world: Hire any of Trump’s fellow fabulists above, and Forbes will assume that everything your company or firm talks about is a lie. We’re going to scrutinize, double-check, investigate with the same scepticism we’d approach a Trump tweet. Want to ensure the world’s biggest business media brand approaches you as a potential funnel of disinformation? Then hire away.

That is literally how journalism works. That is not even a threat because it’s what you should have done all along to do your job properly. Instead, it shows, in a hilarious way, that they haven’t done their job properly at all.

The UK Office for National Statistics says 2020 was the deadliest year in a century in England and Wales.

Vlad said, short and sweet in reference to episode 51:

funkyduck commented on that same episode:

I will just say that whatever we’ve decided to call these folks, they can wave whatever flags they want, but Confederate flags are anti-government.

I was a huge fan of LO, just discovered this recently. I don’t think I agree with you on lots of stuff, but I love hearing well articulated counterpoints.

Which perfectly encapsulates what this show tries to promote.

If you have any thoughts on the things discussed in this episode, please feel free to contact me.