After an angry mob stormed the US Capitol last week, Twitter and other social media companies embarked on an unprecedented power grab for control of the public’s opinion.

Welcome to the first episode of The Private Citizen in 2021! Took me a bit longer to start the show up again after the hiatus, as I was very busy throughout the holidays, but here we are. And, as promised, I have redesigned the website a bit. I hope you like the new look!

Watch this episode being recorded in this YouTube video.

The Storming of the Capitol

On January 6, a group of protesters supporting US President Donald Trump marched on the Capitol Building in Washington, DC. This led to rioters forcing their way into the building and storming the joint session of the United States Congress that was being held their to count the votes of the Electoral College and formalise Joe Biden as the next President of the United States. 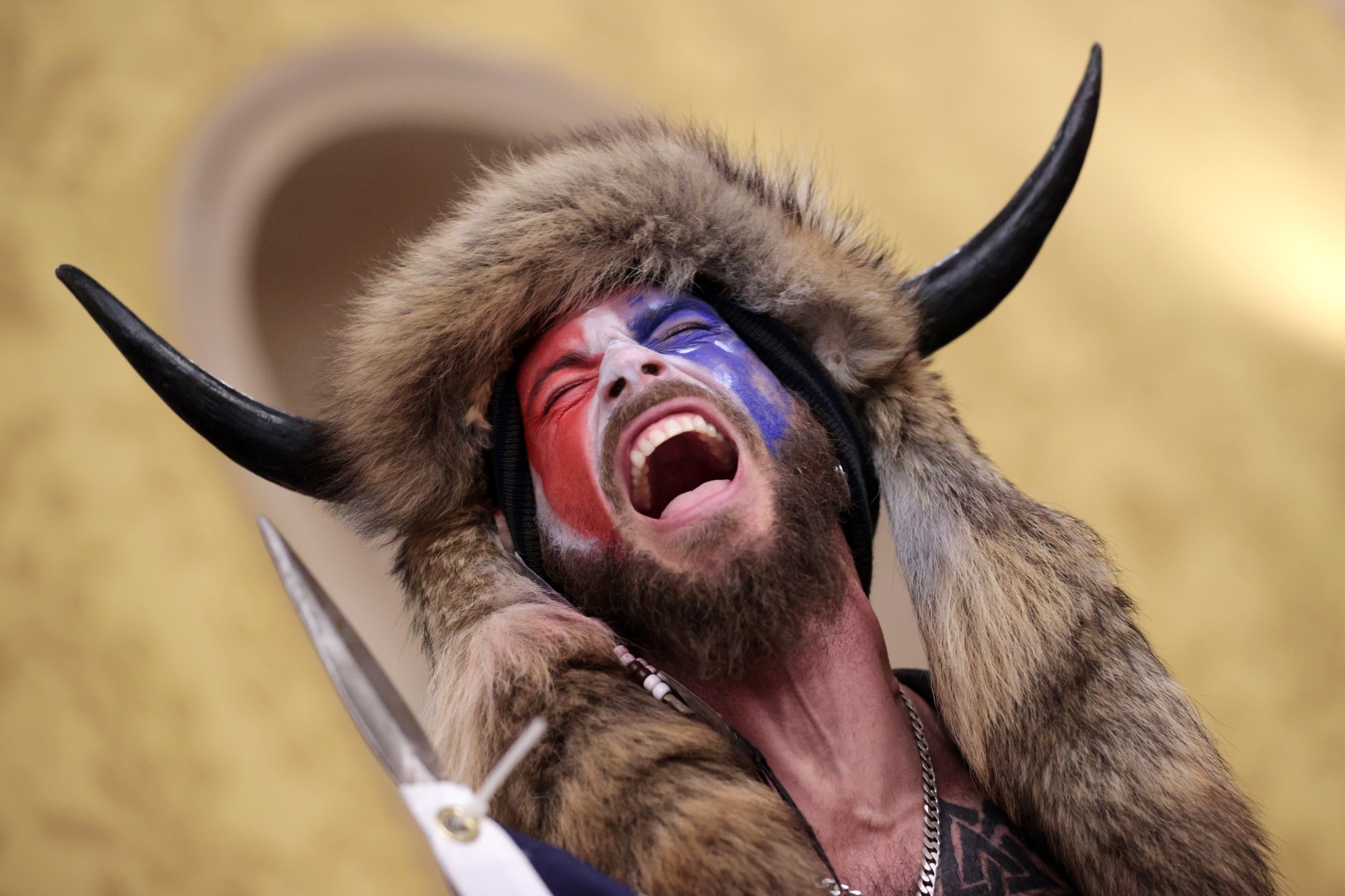 Overrun by Vikings: Jacob A. Chansley, also known as Jake Angeli, inside the US Capitol Building on 6 January 2021 (Source: Win McNamee / Getty Images)

This act of insurrection has been called domestic terrorism, which is debatable, and a coup, which it its obviously not.

A coup or coup d’état (literally “blow of state”; also known simply as an overthrow, takeover, or putsch) is the removal of an existing government from power, usually through violent means. Typically, it is an illegal, unconstitutional seizure of power by a political faction, the military, or a dictator.

It might have actually been closer to an attempted revolution.

In political science, a revolution (Latin: revolutio , “a turn around”) is a fundamental and relatively sudden change in political power and political organization which occurs when the population revolts against the government, typically due to perceived oppression (political, social, economic) or political incompetence.

In book V of the Politics, the Ancient Greek philosopher Aristotle (384–322 BC) described two types of political revolution: 1. Complete change from one constitution to another or 2. Modification of an existing constitution.

So people storming the Capitol wasn’t a coup. But maybe what Silicon Valley did next qualifies.

In response to the ongoing riots, Twitter suspended the account of Donald Trump for 12 hours and made the President delete a number of tweets, allegedly because he had promoted further violence – I can find no evidence of this in the messages that were deleted, nor in any other tweets posted by Trump that day or the days leading up to this. Twitter later completely deleted Trump’s account, while leaving the offical account of the POTUS intact. In fact, one of the tweets Twitter made Trump delete was a speech in which the President urged protesters to “go home in peace” and to “respect law and order”.

Other social networks soon followed suit and banned or restricted Trump’s accounts as well. Meanwhile, other world leaders – led by Chancellor Angela Merkel of Germany – have criticed social networks for the move.

Merkel said through her spokesman that the US government should follow Germany’s lead in adopting laws that restrict online incitement, rather than leaving it up to platforms such as Twitter and Facebook to make up their own rules.

Twitter doesn’t seem to agree and continues to swing the banhammer with glee. One of the most recent victims is the Sci-Hub account.

Sci-Hub founder Alexandra Elbakyan informed us that Twitter has suspended the site’s official account, which had over 185k followers and operated without notable issues for nine years. Elbakyan believes that it may be directly related to the legal action in India.

“It happened right after Indian scientists revolted against Elsevier and other academic publishers after Sci-Hub posted on Twitter about the danger of being blocked – thousands of people spoke up against this on Twitter.

I think all of this is a gross violation of Section 230 of the Communications Decency Act and I agree with Trump’s opinion that it should open up Twitter and similarb Silicon Valley companies to legal action in the US.

But these companies are not content to just exploit the power they have. They are also making sure, nobody else can create a better system and wrest users from them. So, of course, the next step was to destroy Parler.

Critics of Silicon Valley censorship for years heard the same refrain: tech platforms like Facebook, Google and Twitter are private corporations and can host or ban whoever they want. If you don’t like what they are doing, the solution is not to complain or to regulate them. Instead, go create your own social media platform that operates the way you think it should.

The founders of Parler heard that suggestion and tried. In August, 2018, they created a social media platform similar to Twitter but which promised far greater privacy protections, including a refusal to aggregate user data in order to monetize them to advertisers or algorithmically evaluate their interests in order to promote content or products to them. They also promised far greater free speech rights, rejecting the increasingly repressive content policing of Silicon Valley giants.

Over the last year, Parler encountered immense success. Millions of people who objected to increasing repression of speech on the largest platforms or who had themselves been banned signed up for the new social media company.

But today, if you want to download, sign up for, or use Parler, you will be unable to do so. That is because three Silicon Valley monopolies – Amazon, Google and Apple – abruptly united to remove Parler from the internet, exactly at the moment when it became the most-downloaded app in the country.

If one were looking for evidence to demonstrate that these tech behemoths are, in fact, monopolies that engage in anti-competitive behavior in violation of antitrust laws, and will obliterate any attempt to compete with them in the marketplace, it would be difficult to imagine anything more compelling than how they just used their unconstrained power to utterly destroy a rising competitor.

And when I say “destroy”, they did actually completely erase it from the internet:

The day after a united Apple and Google acted against Parler, Amazon delivered the fatal blow. The company founded and run by the world’s richest man, Jeff Bezos, used virtually identical language as Apple to inform Parler that its web hosting service (AWS) was terminating Parler’s ability to have AWS host its site: “Because Parler cannot comply with our terms of service and poses a very real risk to public safety, we plan to suspend Parler’s account effective Sunday, January 10th, at 11:59PM PST.” Because Amazon is such a dominant force in web hosting, Parler has thus far not found a hosting service for its platform, which is why it has disappeared not only from app stores and phones but also from the internet.

On Thursday, Parler was the most popular app in the United States. By Monday, three of the four Silicon Valley monopolies united to destroy it.

After the internet-policing site Sleeping Giants flagged several Parler posts that called for violence, Rep. Alexandria Ocasio-Cortez asked: “What are @Apple and @GooglePlay doing about this?” Once Apple responded by removing Parler from its App Store – a move that House Democrats just three months earlier warned was dangerous anti-trust behavior – she praised Apple and then demanded to know: “Good to see this development from @Apple. @GooglePlay what are you going to do about apps being used to organize violence on your platform?”

As far as I can tell, none of the people arrested for storming the Capitol even had a Parler account at the time.

Glenn Greenwald sums it up nicely:

No authoritarians believe they are authoritarians. No matter how repressive are the measures they support – censorship, monopoly power, no-fly lists for American citizens without due process – they tell themselves that those they are silencing and attacking are so evil, are terrorists, that anything done against them is noble and benevolent, not despotic and repressive. That is how American liberals currently think, as they fortify the control of Silicon Valley monopolies over our political lives, exemplified by the overnight destruction of a new and popular competitor.

I’ve also written two long-form articles on this topic, in case you are interested:

Twitter has just crossed the Rubicon. A corporation has suspended the main means of communication of the head of state of the most powerful country in the world.

It did not take long until Twitter turned the banhammer against those who actually do good. From Trump to Sci-Hub in just two days.

I have successfully defended my Master’s thesis and work as a software developer now, so I fulfilled my promise and joined your Patreon.

I like listening to you and think that what you do is important. Do not take this as support for the Private Citizen, but for anything you apply your approach to. I started listening half-way through LO, and I’ll won’t withdraw my support just because you stop a specific podcast

If you have any thoughts on the things discussed in this episode, please feel free to contact me.