Episode 104: Triage is Too Logical for Germans

When who to save in case of a medical emergency becomes a moral, or even worse, a legal decision instead of a medical one, we all lose. This will soon be the reality in Germany, though, as the Constitutional Court has just passed a very unfortunate ruling in this regard.

Today’s episode of The Private Citizen is about a recent decision by Germany’s highest court to overrule a longstanding, and good, medical practice with a law against discrimination. I will try to explain why this is misguided.

In what I hope will be a follow-up episode, I will try to talk more about the difference between laws and justice – which is very clear in this case but which many people, for some reason, don’t seem to understand and conflate constantly. I’m trying to do this in the following episode, which should be released next week. Probably before Wednesday, as I am busy that day.

that the federal government must draft and pass a law that regulates triage when it comes to the SARS-CoV-2 pandemic. According to the ruling, handicapped people could be discriminated against during triage decisions, which, according to the court, violates the German constitution (the Grundgesetz, or GG for short).

Together with a recent decision that the pandemic-related restriction of civil liberties were justified, I am slowly, but steadily, losing faith in this vital institution of the German democratic system. It seems that actual discrimination when it comes to the impact of the virus and vaccines is OK with the constitution, but necessary and established medical procedures – which have nothing to do with discrimination – suddenly are not. I think this is a gross misunderstanding of the intent of the law and I will attempt to explain why.

But first, it is important to understand what triage is. Triage is a medical protocol that, in a perfect world would not exist, but in real life – sadly – is necessary. Its goal is to save as many lives as possible in unfavourable conditions. Triage is applied when medical resources (beds, doctors, nurses, medicine) are not adequate to the amount of patients who are in life-threatening conditions.

Triage is usually applied when big disasters (car crashes, big fires, terror attacks) temporarily outstrip local capacity of a medical system. Or in war. But of course, it could also happen in a pandemic when a government has sat on its arse for 18 months, ignoring an obvious need to prepare the medical system for a predictable onslaught of patients. Triage is not something anyone plans to do and it is a horrible burden on doctors as well as on the people who can’t be saved and their relatives. But it is necessary and it saves lives.

Triage is a practice invoked when acute care cannot be provided for lack of resources. The process rations care towards those who are most in need of immediate care, and who benefit most from it.

In advanced triage, specially trained doctors, nurses and paramedics may decide that some seriously injured people should not receive advanced care because they are unlikely to survive. It is used to divert scarce resources away from patients with little chance of survival in order to increase the chances for others with higher likelihoods.

Triage and Ethics Do Not Mix

It is important to note, that triage is not concerned with ethics or morals. It’s a purely medical decision. A doctor should not be concerned with moral decisions (or laws, for that matter) when deciding who should live and who must die.

Let’s say there’s a shootout at a bank. A doctor at a local hospital has to decide, who’s likely fatal bullet wound to treat. There’s a civilian bystander, a police officer and one of the robbers. A good doctor decides who to treat based on who’s most likely to survive. What crimes someone might have committed, what colour their skin is, what sexual organs they have or if they are a good person should not play into this decision.

Rescuing as Many People as Possible is Not Discrimination

Triage done correctly isn’t discrimination, it’s purely logic driven by necessity. If a person is disabled and is thus less likely to survive, treating another person makes sense. Same for a person being older or having pre-existing conditions.

The German Constitutional Court might be correct that established legal practice and the letter of the law necessitate a law to protect disabled people. But the spirit of the law most definitely does not. If a law is passed as per their decision, the outcome could be disastrous.

Just imagine the following situation: Two people have a possibly fatal case of COVID-19. The local hospital can only provide care for one of them. One person (patient A) is relatively healthy with good chances to survive given the right care, the other (patient B) is severely disabled and unlikely to survive even with the best care. Ordinarily, a good doctor would decide to treat patient A and, most likely, save them. Patient B would die. Now, the doctor might be legally forced to treat patient B, letting patient A die. Then, patient B dies as well, because it turns out the doctor was right in the first place. The outcome of the law, in the worst outcome, would be that two patients die when ordinarily only one would have died. How exactly is that an improvement?

This is exactly why such decisions should not be made based on emotions or laws, but on logic and medical expertise. Which is exactly how it has worked up until now.

Nobody wants to be on the wrong side of a triage decision. But it is a fact of life that every single one of us could be. And it is better for everyone concerned if we don’t try to legislate our way out of it.

The Difference between Law and Justice

There’s a fundamental difference between laws and justice. Laws are procedures employed by a state to, if everything goes well, approach justice as close as possible. Laws sometimes can cause unjust outcomes, but this is often hard to see for lawyers, state attorneys, policemen and judges.

I will talk about this topic in more general and philosophical terms in an upcoming episode.

As with so many topics concerning the SARS-CoV-2 pandemic, journalists have not been dealing with the topic of triage well. In a recent issue of Der Spiegel, the widely-read German news magazine almost treated it like a concept nobody had ever heard about before. I mean… I know about it since I was 14 from watching a stupid scifi show. 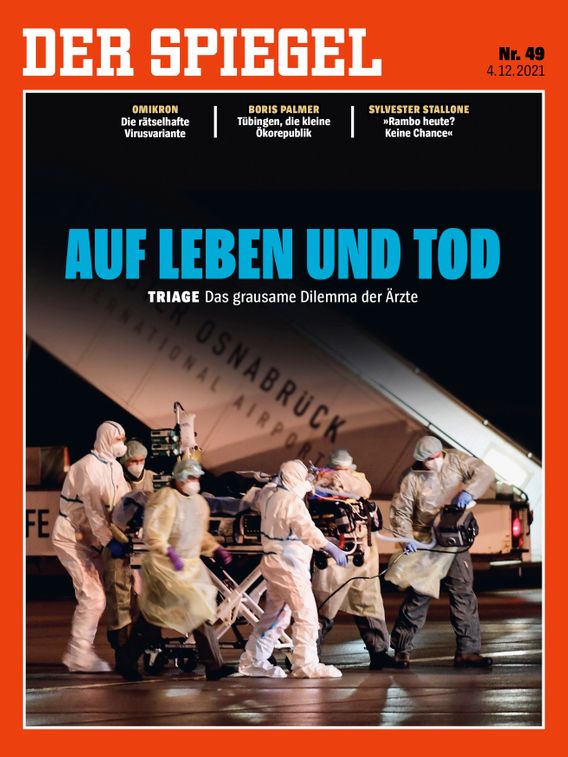 But that wasn’t by far the only stupid coverage of the topic. Talking about the BVerfG ruling in question, public broadcaster ARD didn’t do much better

. Their article includes a box-out that is so tendentious – and also completely wrong in its main explanation – that it’s almost too hard to belive they actually wrote that.

Box-out by public broadcaster ARD trying to explain what triage is – highlight added by me (Source: tagesschau.de)

Feedback from listeners between Christmas and New Year (including in contribution messages) was mostly concerned with how everyone enjoys the show. Most people said they don’t agree with me every time, but they’re all united in understanding that this is the whole point. That actually made me very happy over the holiday break and it gives me a lot of enthusiasm to continue the show throughout 2022!

The show’s theme song is Acoustic Routes by Raúl Cabezalí. It is licensed via Jamendo Music. Other music and some sound effects are licensed via Epidemic Sound. This episode’s ending song is Go On Blues by Bo the Drifter.