Episode 57: All Your Data Are Belong to Us

Why does medical data not belong to the patients? What does that do to science and hospital care? Plus: Why Visa cancelled their bid to buy the fintech startup Plaid.

On this week’s The Private Citizen, I will give you a bit of an update on that Plaid/Visa deal we talked about last year. And I also want to discuss medical data. Because it doesn’t really belong to the patient and I think it should.

This podcast was recorded with a live audience on my Twitch channel. Details on when future recordings take place can usually be found on my website. Recordings of these streams get saved to a YouTube playlist for you to watch after the fact.

Please be aware that it is possible that I’m skipping next week’s episode. I’ve ordered a new CPU (a Ryzen 5 5600X) and motherboard and need a day or two to upgrade my PC. I will make up for the lost episode by recording it later in addition to whatever episode I was going to do that week.

It turns out that Visa had to terminate its $5 billion deal with Plaid due to antitrust concerns. I had talked about Plaid and about this deal in episode 20 from last year.

This news is from the middle of January, but I’m just now getting around to talk about it.

The deal, valued at $5.3 billion at the time of its announcement, first broke cover on January 13, 2020, or nearly one year ago to the day. However, the Department of Justice filed suit to block the deal in November of 2020, arguing that the combination would “eliminate a nascent competitive threat that would likely result in substantial savings and more innovative online debit services for merchants and consumers.” At the time Visa argued that the government’s point of view was “flawed.”

However, today the two companies confirmed the deal is officially off. In a release Visa wrote that it could have eventually executed the deal, but that “protracted and complex litigation” would take lots of time to sort out. Plaid was a bit more upbeat in its own notes, writing that in the last year it has seen “an unprecedented uptick in demand for the services powered by Plaid.” Given the fintech boom that 2020 saw, as consumers flocked to free stock trading apps and neobanks, that Plaid saw growth last year is not surprising. After all, Plaid’s product sits between consumers and fintech companies, so if those parties were executing more transactions, the API startup likely saw more demand for its own offerings.

Why Don’t We Own Our Medical Data?

At FOSDEM this year, I covered an interesting talk for heise online

. In his presentation, Juhan Sonin, who designs software for healthcare systems, argued that we should own our medical data.

As it turns out, your medical data doesn’t belong to you. If you go to a hospital or another healthcare facility for treatment, the data they collect about you belongs to them. In the EU, you have rights with respect to this data – chiefly governed by the GDPR – but that just specifies controls that you can leverage on data about you that belongs to other people. In fact, the GDPR explicitly states that this data does not belong to you.

Now Sonin, on the other hand, proposes a system where your health data belongs to you and people and organisations who want to use it need to license it from you – essentially by signing a contract with you. Sonin proposes to do this with an automated system that keep your health data save and imposes access restrictions set by you. This would automate the contracts that you can then sign with healthcare providers, presumably using an app for example. 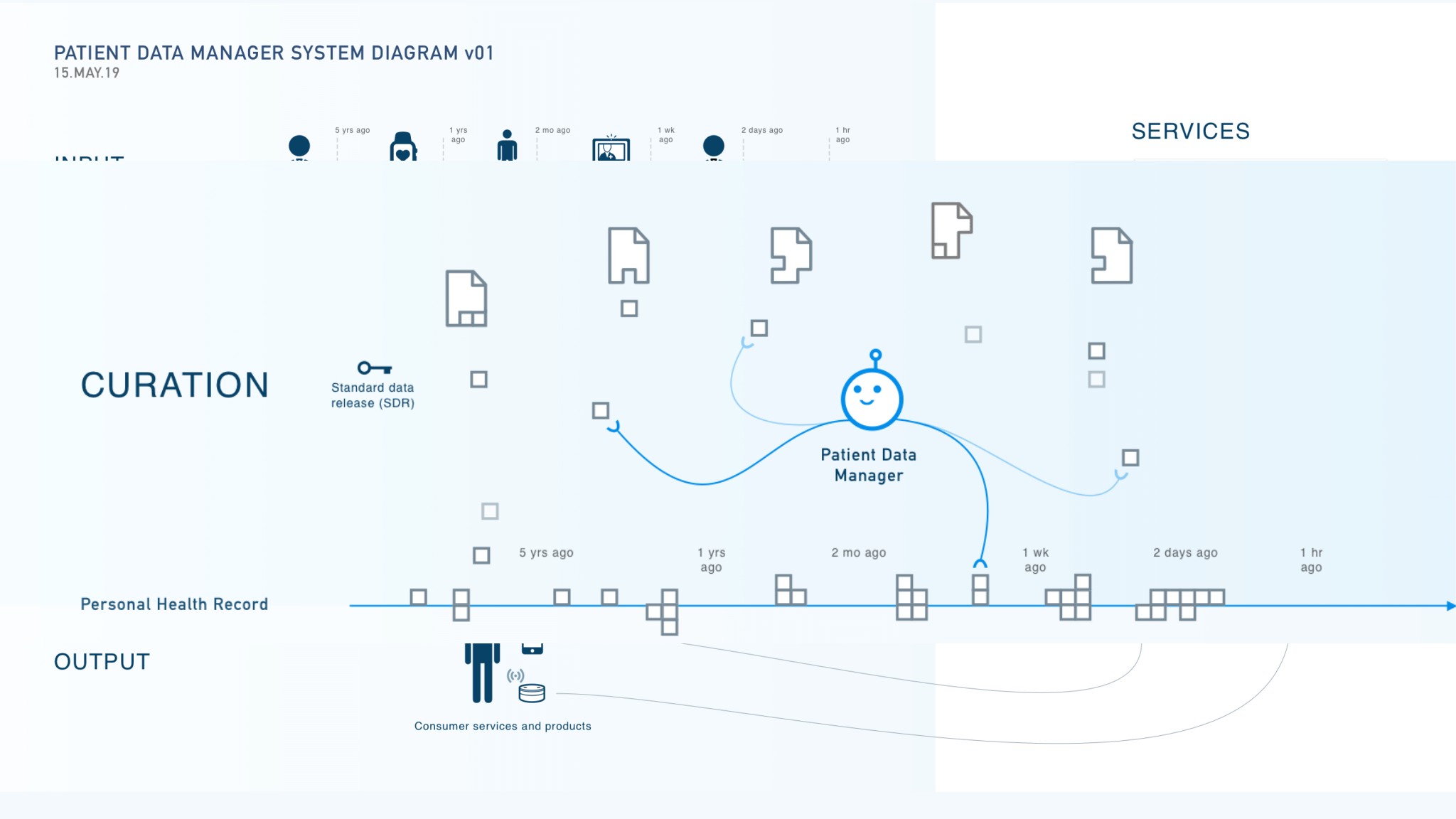 Sonin thinks this is needed because pharma companies are making a lot of money with this kind of data – without giving back to patients (whose data this is), scientists and doctors (who worked to accumulate this data) or the tax payer (who in a lot of instances paid for that work). In his talk, he quoted a New York Times story from 2018 which epitomises this problem.

An artificial intelligence start-up founded by three insiders at Memorial Sloan Kettering Cancer Center debuted with great fanfare in February, with $25 million in venture capital and the promise that it might one day transform how cancer is diagnosed. The company, Paige.AI, is one in a burgeoning field of start-ups that are applying artificial intelligence to health care, yet it has an advantage over many competitors: The company has an exclusive deal to use the cancer center’s vast archive of 25 million patient tissue slides, along with decades of work by its world-renowned pathologists.

Memorial Sloan Kettering holds an equity stake in Paige.AI, as does a member of the cancer center’s executive board, the chairman of its pathology department and the head of one of its research laboratories. Three other board members are investors.

The arrangement has sparked considerable turmoil among doctors and scientists at Memorial Sloan Kettering, which has intensified in the wake of an investigation by ProPublica and The New York Times into the failures of its chief medical officer, Dr. José Baselga, to disclose some of his financial ties to the health and drug industries in dozens of research articles. He resigned last week, and Memorial Sloan Kettering’s chief executive, Dr. Craig B. Thompson, announced a new task force on Monday to review the center’s conflict-of-interest policies. At a staff meeting Thursday morning, Dr. Thompson and others, including Dr. Lisa DeAngelis, the acting physician-in-chief who replaced Dr. Baselga, described the recent events as a disruption and acknowledged that the hospital was under a microscope, according to several people who attended. Doctors said they were concerned about a lack of communication from hospital leadership, and one said patients were nervous that their health data was being commercialized by the institution.

Hospital pathologists have strongly objected to the Paige.AI deal, saying it is unfair that the founders received equity stakes in a company that relies on the pathologists’ expertise and work amassed over 60 years. They also questioned the use of patients’ data — even if it is anonymous — without their knowledge in a profit-driven venture.

In exchange for sharing its voluminous database, Memorial Sloan Kettering received ownership shares amounting to about nine percent in the company. “It just seems awfully coincidental that the individuals involved happen to be people in control and influence of that asset, and they ended up with an exclusive use of it,” said Marcus S. Owens, a Washington lawyer who ran the Internal Revenue Service division that oversees tax-exempt organizations. “It seems to create a cascading series of conflicts for the operation of Sloan Kettering.”

The decision to license images of the patients’ tissue slides to a for-profit company also highlights the broader debate over the use of personal medical data, ranging from genetic information to, in this case, images of a person’s cells, for research and commercial purposes.

Dr. Klimstra and another co-founder, Dr. Thomas Fuchs, the head of the computational pathology laboratory, pursued the idea for Paige.AI in 2015, hospital officials said. Dr. Fuchs had previously worked for NASA developing algorithms that would teach the Mars rovers to navigate terrain, and has said some of the same algorithms can differentiate cancerous tumors from benign ones. In a statement, he called the AI start-up the culmination of his “life’s work.” 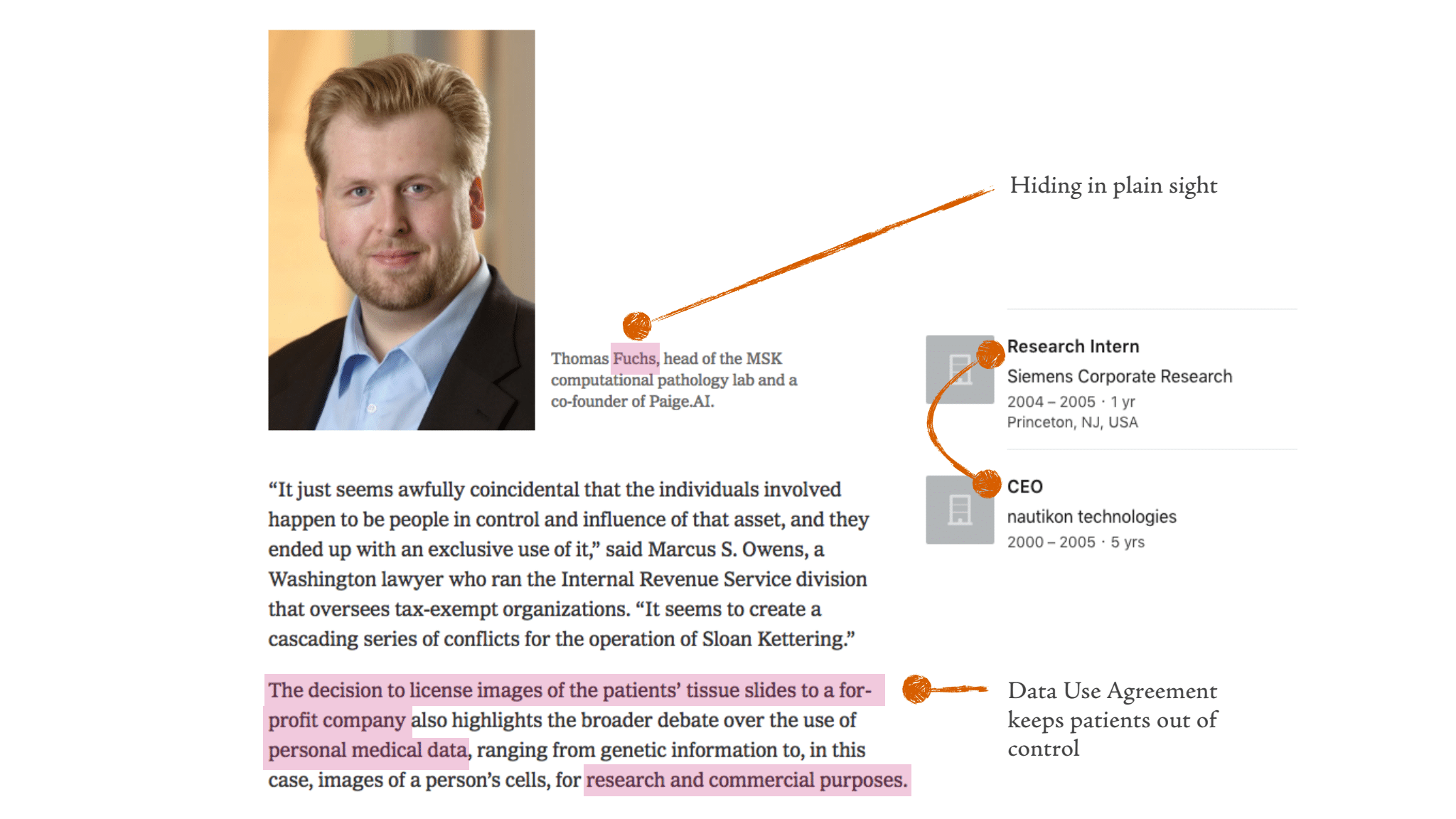 Fuchs, a Director at MSK and portraited as a scientist, also has ties to the coporate world (Source: Juhan Sonin)

Universities and teaching hospitals have long sought to turn their scientific discoveries into lucrative business deals. Indeed, 10 cancer drugs approved by the Food and Drug Administration originated at Memorial Sloan Kettering. But the Paige.AI arrangement is different because what’s being commercialized is not an invention, per se, but rather access to raw materials – notes and slides – gathered over decades.

Experts in nonprofit law and corporate governance questioned whether Memorial Sloan Kettering, which is a charity, acted properly in what is known as a related party transaction with the founders of Paige.AI.

Doctors also expressed concerns about whether patients had consented to have images of their tissue used in this way.

Maybe it is time for truly non-profit hospitals that operate solely in the public’s interest? And maybe Sonin is right and we should give patients the sole control over what others can do with their data.

This will undoubtedly cause issues for scientists working with patient data. But some people, who I know and who work in this field, have told me that it might actually be beneficial to force hospitals and private companies to be more careful, abide by stricter rules and use a more standardised system to store this kind of data.

astralc comments on episode 56 and the Matrix protocol:

Captain Egghead asks if I was aware of the censorship issue with Matrix and Google Play.

If you have any thoughts on the things discussed in this or previous episodes, please feel free to contact me. In addition to the information listed there, we also have an experimental Matrix room for feedback. Try it out if you have an account on a Matrix server.