An update on the Danish intelligence scandal, Google’s plans to learn all about the things you get up to in hotel rooms and how to find out if your favourite podcast is tracking your listening habits.

This will be the last episode of The Private Citizen from Hamburg, at least for the forseeable future. Ahead of my move to Düsseldorf, I’m addressing a few things that were still on the to do list to talk about. I will be back with more episodes and the usual Wednesday release schedule at the beginning of October, if everything goes according to plan. Until then, here’s an update on a story I talked about previously and some smaller news items I found interesting.

As I had suspected, the issue at the heart of the recent Danish intelligence scandal was the sharing of information with US intelligence services.

Denmark’s foreign intelligence unit has shared raw data from information cables with the U.S. National Security Agency, which could have given the NSA access to Danish citizens’ personal data and private communications, according to state broadcaster DR. DR said late on Thursday, quoting sources, that the case is linked to the sharing of large quantities of information with the NSA. The Ministry of Defence declined to comment on the DR report when contacted by Reuters.

Those temporarily suspended were the head of the service, Lars Findsen, former head and current permanent secretary at the Ministry of Defence, Thomas Ahrenkiel, and two other unnamed officials.

Thomas Ahrenkiel was supposed to become the new Danish ambassador to Germany at the beginning of this month. Of course, in the wake of the scandal this didn’t happen.

Susanne Hyldelund, the former head of the Trade Council and Global Sustainability, takes her position as Danish ambassador to Germany today. The position had been earmarked for Thomas Ahrenkiel since June 30, but he was sent home in the wake of the criticism surrounding the Defence Intelligence Service, which he led until 2015.

If you have smart home devices, companies like Google and Amazon know a lot about what’s going on in your private life. It seems that they don’t like to lose this insight when you happen to be travelling. That’s why Google is now pushing to get their devices into hotel rooms. All couched in the ever-present excuse of the age: COVID-19.

Google wants its Nest Hub to become a fixture in hotel rooms so that guests can enjoy their stay without having to actually touch any of the amenities they are paying for. The device, which is being piloted in several hotels across the US and the UK, offers guests the chance to replace calls to hotel staff with a Hub device that listens in on requests for more towels or information about pool closing times.

Google’s sell for the new “hospitality solution” is that it allows guests can use the hotel’s amenities without having to speak to another actual human being or touch the room’s potentially plague-ridden telephone. “Whatever reason is driving you to consider staying in a hotel room, you know you want to take as many precautions as possible,” wrote Tom Franklin, product manager for Google Assistant, in a blog post.

All of this is completely harmless from a privacy perspective. Of course.

For those worried about Google Assistant listening in on whatever it is they get up to in hotel rooms, Google says the device has no camera and its mic can be switched off. “No audio is ever stored, and any activities will be wiped from the device when it’s reset for the next guest,” Franklin promised.

The new features are largely hotel-centric tweaks to existing Google Assistant functions, which the company promises can be connected to in-room entertainment devices or even control the room’s blinds, TV, and lights. Google also suggests the devices could be used to replace a concierge by offering recommendations and bookings for local restaurants.

Off the Grid: Learn about Podcast Tracking with Overcast

The iOS podcast client Overcast is trialing a new feature that shows listeners what tracking technologies a particular podcast uses.

The latest update to Overcast, a popular iOS podcast app, is bringing new transparency to podcast ads. Listeners who are in the beta can now view the services their favorite podcasts use to serve ads and track listeners. This means listeners will be able to tell when a podcast is using dynamic advertising, which allows networks to swap and target ads based on the specific person listening. Overcast’s beta is open to the public, and to view a show’s privacy settings, you’ll just have to tap on the show and then select privacy and tracking. From there, you’ll see the lists of services it uses and what those services do. 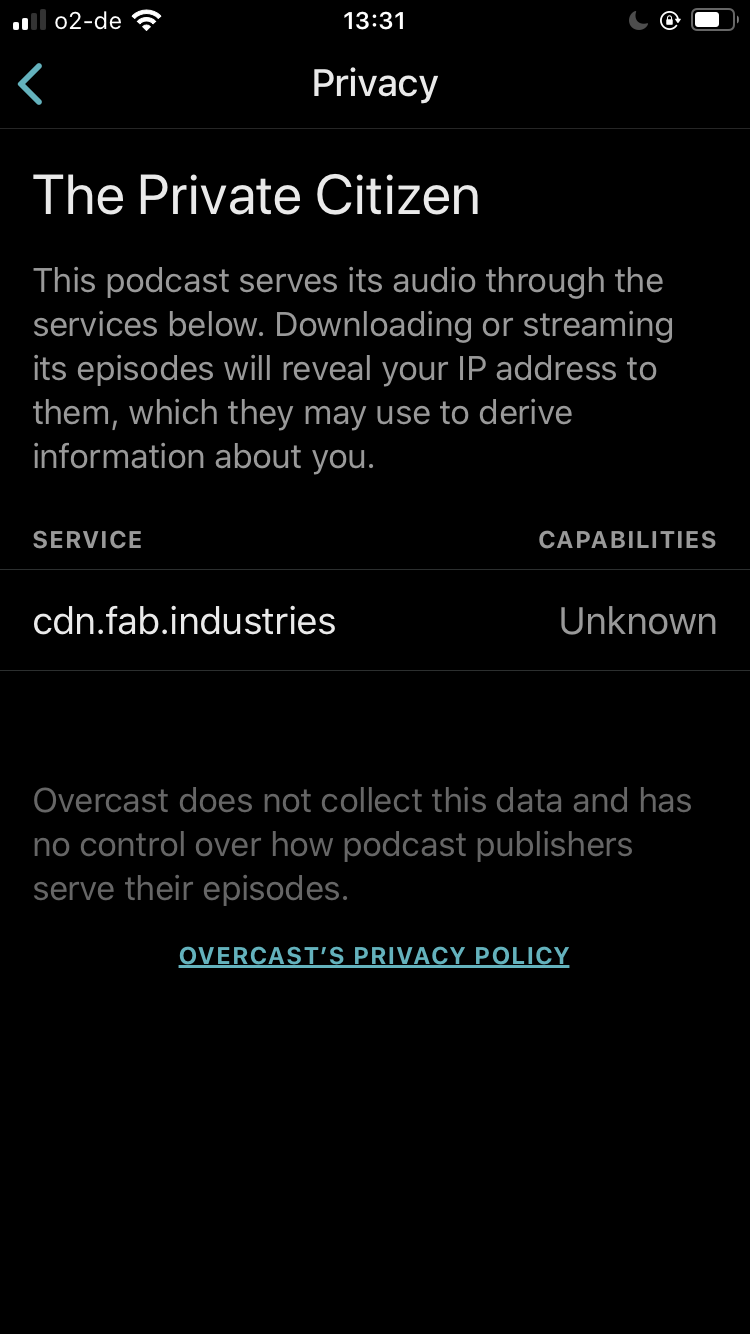 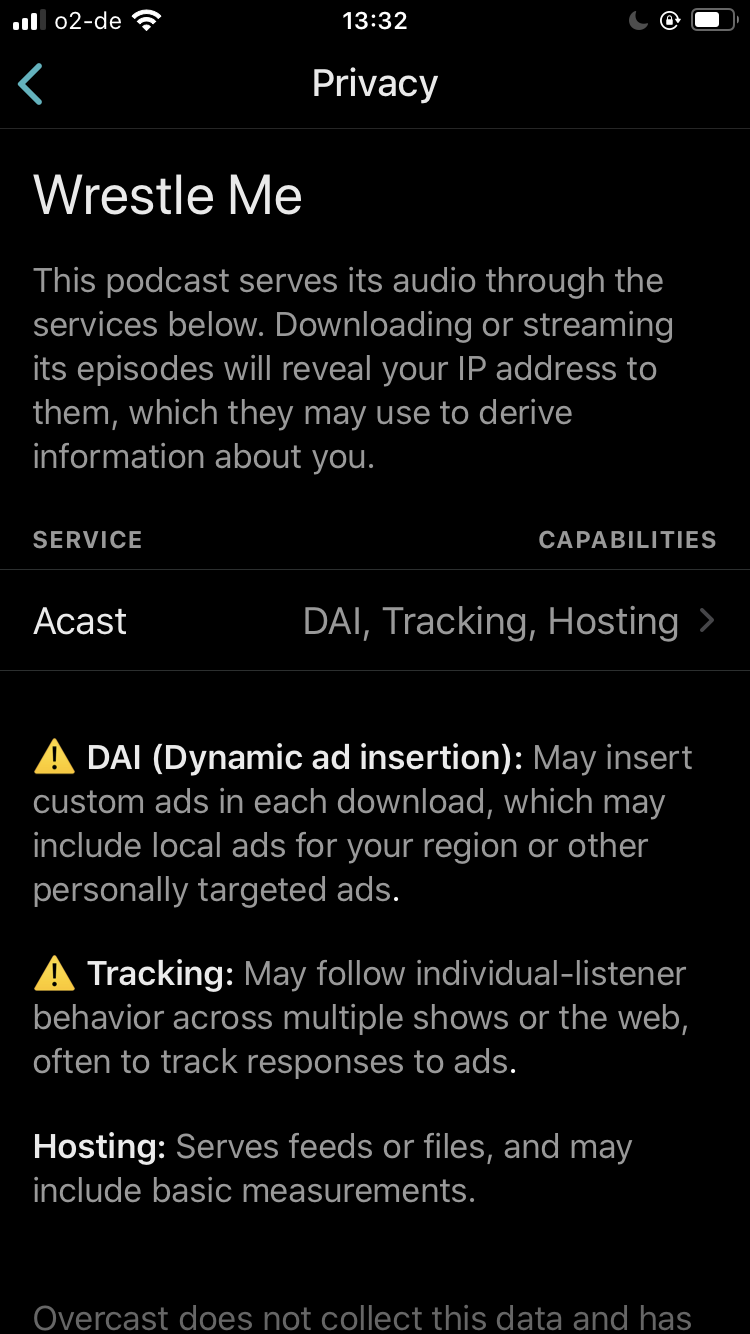 For example, The Vergecast uses Megaphone to host its podcast, track, and insert its dynamic ads. It also relies on Chartable, a podcast marketing company, for further tracking and stats collecting, as well as Podsights and Podtrac for even more tracking and stats. Within Overcast, you can tap on the services to learn more about them.

Barry Williams gave me some feedback via Discord:

In your immunisation primer you say that just because you are immune to a virus does not mean you cannot spread it. While it may technically be correct, I would say the ability to spread would be far reduced due to the body destroying all the virus it can so there are less active virus to spread. This is the idea of herd immunity so if I cannot be immunised for some reason I am still protected. Also in Australia it is now mandatory to be up to date with immunisation to attend school or child care. I agree with this because if I want to be sure when I send my child to school they are safe. There are exemptions, so if you medically cannot be immunized you can attend at school and heard immunity will allow these people to attend the school safely.

If you also have thoughts on the topics discussed in this or previous episodes, please feel free to contact me.