Episode 128: Ask the Next Question 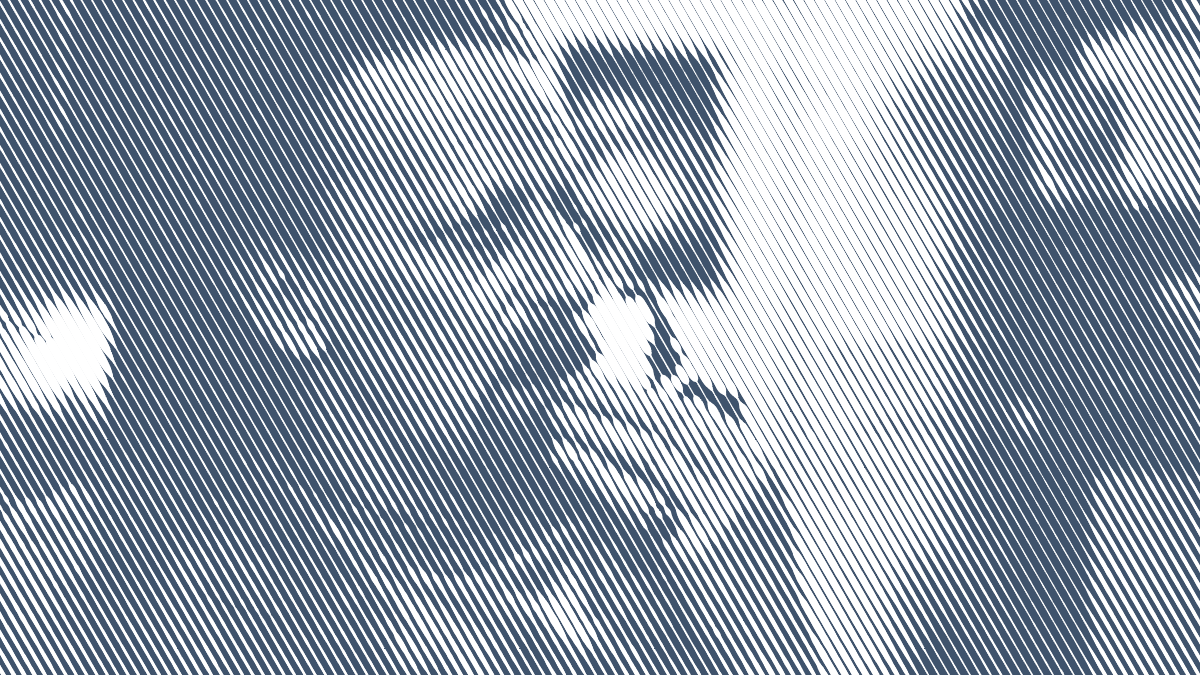 Science-fiction writer and critic Theodore Sturgeon not only invented the Vulcan salute and the Prime Directive for Star Trek, he also pioneered a very interesting approach to critical thinking centred around always asking the next question.

In this episode of The Private Citizen, I want to discuss a wonderful idea I recently learned about: Theodore Sturgeon’s approach to critical thinking called “Ask the Next Question”, or “Q→”.

Science-fiction writer and critic Edward Hamilton Waldo (1918 - 1985), better known as Theodore Sturgeon, developed an idea for critical thinking called “Ask the Next Question”. He developed a symbol for it, a capital Q with an arrow pointing through it, that he incorporated into his signature, wore as jewellery and which also adorns the Theodore Sturgeon Award.

Sturgeon, who wrote 11 novels and more than 120 short stories as well as approximately 400 reviews, also did ground-breaking work on Star Trek:

Sturgeon wrote the screenplays for the Star Trek: The Original Series episodes “Shore Leave” (1966) and “Amok Time” (1967). The latter featured the first appearance of pon farr, the Vulcan mating ritual, the sentence “Live long and prosper” and the Vulcan hand symbol. Sturgeon also wrote several Star Trek scripts that were never produced. One of these first introduced the Prime Directive.

Sturgeon explained the concept of “Ask the Next Question” in a June 1967 essay for Cavalier Magazine as such: 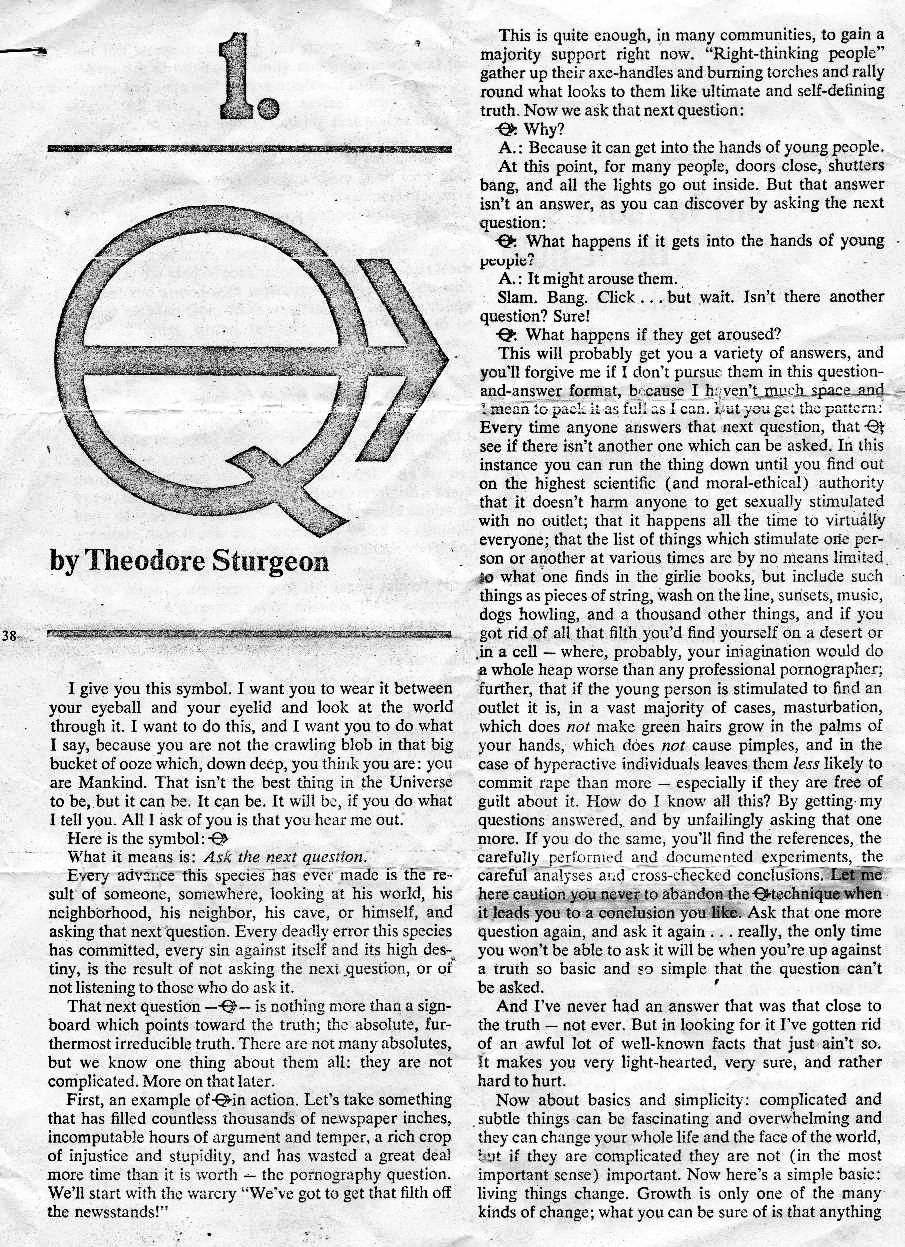 Sturgeon explaining the idea of “Ask the Next Question” in a June 1967 essay in Cavalier Magazine (image source: Christopher McKitterick)

Bazzawill wrote a long message on the forum in reply to episode 127. It includes a lot of information that, in my opinion, isn’t directly relevant (at least to a majority of the listeners) when it comes to what was actually discussed in that episode. I will answer a few minor points directly here, the rest can be read (and discussed) on the forum.

However, I will argue against something else you may have eluded to if I understood correctly “isn’t everyone a little autistic”. This is something that we hear frequently. While neurotypicals and alistics can experience some of the same difficulties as autistics and neurodivergent individuals the difference is severity and pervasiveness. What makes me autistic (a recognised disability) is that it affects my entire life in a way that makes my life.

You requested that I say more on my like of ST:D I will say it is not my favourite show. I have still not finished the latest season as it does not get prime viewing for me (and I am currently busy studying (not to be a teacher anymore), working, recovering (from living in an alistic world)). I enjoy ST:D and I have not found anything objectionable in the content. I did raise an eyebrow to Michael’s character at first but then moved on. It has been a few weeks since I watched and sporadically at that so I cannot say more. Perhaps if I did try to watch it all in one sitting it may grate on me more or I may have more to say.

I understand what you say about media representing society Trans and Non-Binary individuals make up 1.6% of the population so 2% representation on screen is fine. However by that logic the population should have many more Superheroes, Action heroes, etc. What I mean here is media tells a story for the benefit of the viewer not necessarily to represent reality and all of society. The benefit of increasing representation (across many under represented groups) is twofold: a. As mentioned the effect on these groups is profound. b. Educating the rest of society about the reality of these groups.

With respect to the same episode, nekr0z commented:

You mention that “doing the same thing again and again, hoping for a different outcome” is a definition of insanity. While it might be insane (in Drachenlord’s case), I feel the urge to observe that this is actually the definition of training.

I also got an interesting email by someone who used to serve in the US military responding to some older episodes that were released before the current escalation of the war in Ukraine in February:

Ironically I think Trump was trying to get the EU to stand on its own by forcing European NATO countries, especially Germany, to increase their percentage of GDP expenditure on the costs of NATO. I don’t think that there should be a single US soldier in Germany. I think if we have them they should be in Poland. I knew several soldiers posted in Germany at multiple different places. It was the best place to get stationed. However, back then in the ’90s they all expected that if war were to break out, they would die in the Fulda Gap.

I mean, the soldiers in Germany are not enough to stop a war with Russia, but what they are is a message to Russia that if you invade Germany, you’re going to kill American soldiers and therefore declare war an America and therefore get fucked in the end. I mean that was the Cold war idea. The Cold War is over.

Needless to say, I don’t think that Russia is a reliable partner for anybody in Europe, so long as they’re being led by a madman. Even if they’re led by a totalitarian dictator who is at least consistent and sane, it would be okay, but I don’t think the current situation works. You don’t get to bomb apartment complexes and be considered someone who you want to have business with. I wholeheartedly agree that all European nations need to increase defense spending and not rely on the US. However, we do have the world’s most powerful military. Also, the EU needs to become a superpower in their own right or they fall under the sway of a superpower. I’ll give you three to choose from: The United States, China or whatever is left of Russia. Of those three superpowers, which would you prefer to be under the sway of? We’re not perfect. We’re pretty fucked up, but at least we align mostly with your ideas of free speech, freedom of the press, etc. Although things seem to be going to hell in a handbasket in that area.

That’s my feedback about US troops in Germany. You guys have put on your big boy pants and I think you should get your own nukes and I also think it would be cheaper if we moved our soldiers to Poland and it would be better for their economy to have the US pumping shit tons of money into their local economy, which is what happens when we come and stay for a visit. And wouldn’t it be nice if all those weapons left in Afghanistan were instead available for Ukraine.

The show’s theme song is Acoustic Routes by Raúl Cabezalí. It is licensed via Jamendo Music. Other music and some sound effects are licensed via Epidemic Sound. This episode’s ending song is Rock Dawg by Def Lev.